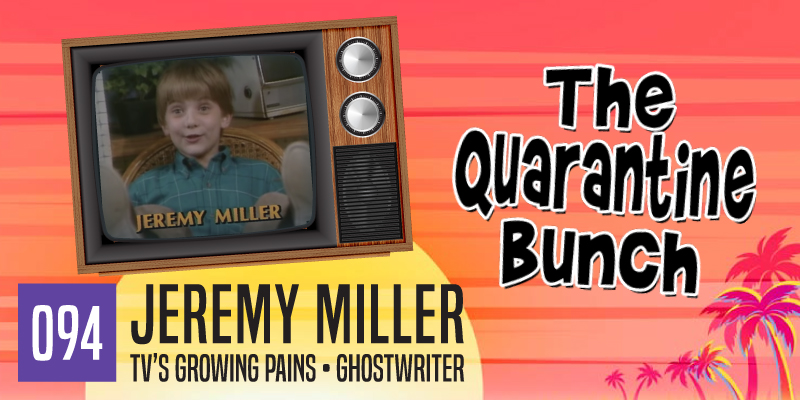 THE QUARANTINE BUNCH is an online web series that peeks in on a support group for former child stars from our favorite tv shows & films and how they are coping and not coping with the pandemic. In Part 2 of our interviews with the cast and creators, we visit with JEREMY MILLER, best know for his role as Ben Seaver on Growing Pains and PBS series Ghostwriter! We chat about his life on set, his relationship with Alan Thicke, and his adventures as a chef!

We are also joined by producer Jeff MacIntyre and writer Ryan Paul James, the co-creators of the series!
We go behind the scenes with them about the development of the series, we also get a surprise visit from Melissa Disney in pure Debbie From Tarzana fashion!

Friday, we recorded Part 2 of our interviews with The Quarantine Bunch @thequarantinebunch! This time around we were joined by Jeremy Miller @therealjeremymiller, best know for his role as Ben Seaver on Growing Pains! We are also joined by the creators of the web series Jeff MacIntyre & Ryan Paul James @rpjames! We even get a surprise visit from Debbie From Tarzana herself, Melissa Disney-James @melissadisneyjames! #benseaver #childstars #comedy #coronavirus #covid19 #growingpains #jeffmacintyre #melissadisney #quaratine #ryanpauljames #thequranatinebunch #webseries