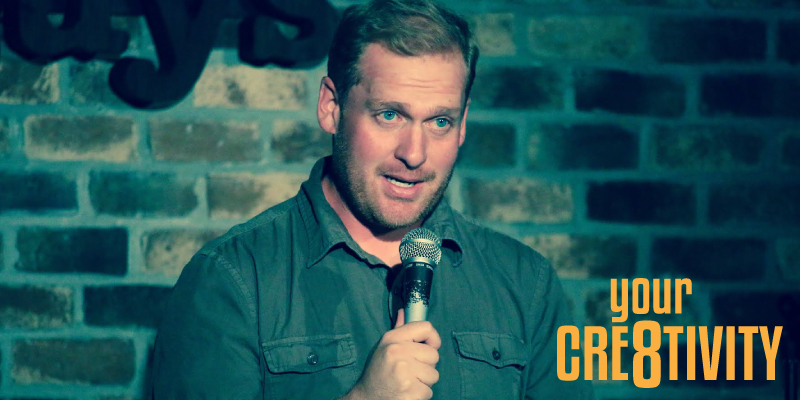 The Golden Spike Comedy Festival was amazing! Our friend and comedian ANDY GOLD came to town from LA to participate and kill! Your Creativity‘s own Dylan had the opportunity to sit down with him in the backroom of one of the festival venues. We talked comedy, LA & the return of his Big Wet Podcast!

Andy Gold lives in Los Angeles and writes and tells awesome jokes. The winner of the Salt Lake Comedy Festival, Andy has also been accepted in festivals and competitions all over the country, including the Boston Comedy Festival, Ventura Comedy Festival, Rocky Mountain Laugh Off, San Diego Comedy Festival, Laugh Your Ashville Off, Trial by Laughter Comedy Festival and Idaho Laugh Fest. Andy draws much of his comedy from being a recovering heroin addict. Which led to him being part of the 2017 Addicts Comedy Tour, a 56 city tour across the United States, Canada, and the UK. Andy’s awesome jokes have also appeared on Comedy Time TV, Comcast, Hulu, and Nick Mom (which is impressive since Andy is definitely not a mom). A prolific writer, Andy’s material runs the gamut from talking about being a recovering addict to dating, to family, to working at his dad’s produce stand, and it’s all tied together by one thing, and one thing only: really big laughs.