The show is back. We were off last week but we’re here and full of steam. Our first guest this week is Amerah Ames. I’ve seen her starting to go around the open mic scene and wanted to talk to her some. She’s young, wears funky sweaters, is a student at the U. If you’ve seen her do stand up in small bits around town here’s a chance to hear her speak a little more about growing up, interests in film and music and her goals in comedy.

So I got to thinking, how do you check out the new comers to the standup scene? Monday nights, right here at the university Student Union Theater show starts at 7:30. Its low key and you can watch comics work out ideas and grow into something bigger. Tuesday night, Mo’s Diner is the place to be. Comedy, free form, and who knows what you might see. It’s fun. Wednesday is open mic night at Wiseguys Comedy Club. This is a traditional open mic. A great stage for: new comics, veteran comics, food and drink. Check them out people, there are folks flexing comedy biceps in this town.

It’s been a tough two weeks for the Utah Utes they have lost back to back weeks against top 25 teams. I knew it would be tough but I thought we’d get one out of two. It didn’t happen, that’s sports though. Michelle Bodkin joins ’OUR,’ to tell us the injury report and her thoughts for the Stanford game this week. She’ll be at the game as a fan and I make a very unique wardrobe suggestion for her future game appearances. Will she take my idea? Listen in. Find out the Ute inside track and get your knowledge straight for the upcoming game. 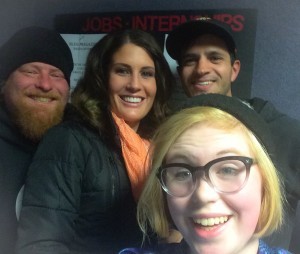